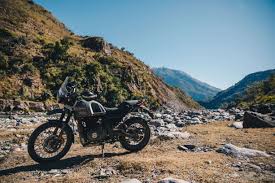 The Himalayan is a first adventure touring motorcycle release by the Royal Enfield. First launched in 2016, it is becoming an increasingly popular choice for the riders with the taste for more challenging routes.

The Himalayan differs considerably from the other motorcycles offered by Royal Enfield  (most of which are various incarnations of the Bullet utilizing similar frame and engine) both in terms of its looks and specifications.

It is the first in the family of the Royal Enfields using electric fuel injection (as opposed to the most common carburettor). Officially called LS410, the new engine is a single-cylinder 4 – stroke, oil-cooled (which translates to a higher revving motorcycle), that comes with the oil cooler – also an innovation for this producer. It is fitted with counter balancers to keep the engine vibrations in check. Also, it is the first Royal Enfield to come with a monoshock rear suspension.

This model was designed specifically for touring and features an up-right seating position, with a seat height of 800 mm, allowing the rider to be seated relatively low compared to the overall height of the motorcycle (however, the seat height is not adjustable and therefore not comfortable for shorter riders). The motorcycle features mounts on either sides of the tank, which can serve as holders for jerrycans, as well as tank guards. The rear includes a luggage carrier.